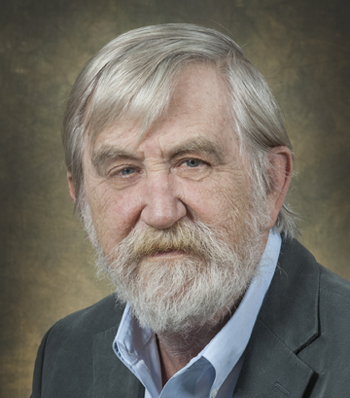 David Evans, Ph.D. joined the Department of Biochemistry, Microbiology and Immunology at Wayne State University in 1976. He has a B.S. in Chemistry from the University of Notre Dame and a Ph.D. in Biochemistry from Wayne State University School of Medicine. His postdoctoral training was in the Department of Chemistry at Harvard University under the tutelage of Dr. William Lipscomb. He then spent a year as a Research Assistant Professor at Harvard Medical School and the Massachusetts General Hospital in Boston before joining the School of Medicine faculty.

The current focus of his laboratory is on two main projects.

Drug Design Project
Peptide Bacterial infections in the blood, if left unchecked, lead to severe sepsis and ultimately the failure of major organ systems. Due to rampant bacterial drug resistance, the arsenal of effective antibiotics is rapidly dwindling. The level of nucleotides is limiting in blood so the organisms must rely on de novo pyrimidine biosynthesis for growth. Based on biochemical and structural studies of the pyrimidine biosynthetic enzyme, aspartate transcarbamoylase (ATCase) from Aquifex aeolicus, we have synthesized a novel peptide which is a strong non-competitive or allosteric inhibitor of the enzyme. The peptide does not bind to the catalytic site but rather serves as a molecular wedge that interdigitates between the ATCase domains blocking the conformational change essential for catalysis. In collaboration with Dr. Brian Edwards, we have extended these studies to two organisms that are important causative agents of bacteremia, Pseudomonas aeruginosa and Staphylococcus aureus, and now are attempting to design peptides that specifically target these pathogens.

Fam129B Project
The protein, FAM129B was discovered in a proteomics study as a target of MAPK (Erk1/2), the kinase activated in all proliferating cells including breast cancer. The protein is now known to suppress apoptosis and increase cell invasiveness, two prerequisites for metastasis. We have worked out the complex mechanism whereby FAM129B suppresses apoptosis. Moreover, the protein is normally cytosolic but when the cells come in contact with each other, FAM129B translocates to the cell membrane where it co-localizes with β-catenin as the adherens junction assembles. The most intriguing observation was that the intracellular concentration of FAM129B in normal breast cells was barely detectable, while in malignant tumor cells it is elevated and in metastatic breast cancer cells it is massively overproduced, suggesting that FAM129B plays an important role in the transition from normal beast cells to metastatic cancer cells.